The Joy Luck Club: Past Modal Verb - Should: Expressing Regrets

This a great drama full of cultural references. I love this scene because of the American guy who is having dinner with his fiance's family for the first time and everything he does is culturally inappropriate. It is perfect to express regrets using modals in the past. 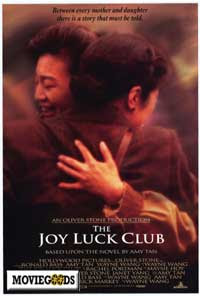 Check what happened in the segment.

( ) The Chinese American woman introduced her fiance to her mother.

( ) She forgot to warn her fiance about a few important rules on Chinese manners.

( ) He had a second glass when everybody had had only just a little.

( ) He didn’t take a small spoon of the main dish.

( ) He bragged he was a fast learner.

( ) He criticized her mother’s cooking.

( ) He didn’t say it was the best dish he had ever tasted.

I. Rewrite the sentences using should to express regret:

Ex:
The Chinese American woman shouldn’t have introduced her fiance to her mother.

She shouldn’t have forgotten to warn him a few important rules on Chinese manners.


II. Now, write two sentences saying should do after this unfortunate dinner.


Ex:
They should stop trying to please her family.

• Students write sentences expressing regret - should (not) have done.