Happy Feet: To Be Supposed to

I think this is one of the best animated movies of all times. I love Prince, and this movie has some of his greatest songs. This scene can be used for several grammar points, such as modal verbs, but I used it for the students to practice the use of to be supposed to, which is a tricky grammar point, especially for us Brazilians. There is not a corresponding cognate or expression, so pupils usually misuse it. The scene is great. 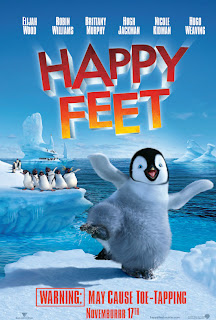 Remember: 'to be supposed to' can mean to be expected or required, not only by duty, but also by law, morality, custom etc, to do something.


A. Read the penguins' motto below and try to figure out what it means:

TOGETHER, WE PREVAIL.
IN WISDOM, WE TRUST.

B. As the motto implies, penguins have a belief that they must act the same way to survive and perpetuate the species. Two important premises: penguins sing; they don't dance. Watch the movie segment now and complete the blanks with affirmative and negative forms of the verb to be supposed to.

1. The most important penguins in the colony are disgruntled because penguins ___________ (dance).

Tags: to be supposed to