In my opinion, this is one of the best 007 movie. I used this scene to have students practice the use of the past perfect x simple past tenses. 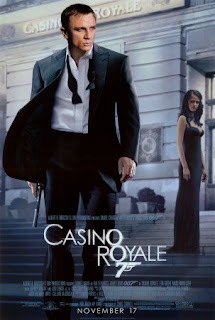 b)
( ) Two guys gave Bond their car keys by mistake.
( ) Bond crashed their car in the parking lot.

d)
( ) He made a reservation at the hotel
( ) He saw the images of the parking lot in the surveillance room.

Now fill in the blanks of the exercise below with the simple past or the past perfect forms of the verbs in parentheses. You may use "already" if it is applicable.

Grammar Goal: Simple Past x Past Perfect
• Select a scene in which there is a sequence of events.
• Prepare an exercise in which the students have to decide which action took place first.
• Students write 1 or 2 in the exercise parentheses, according to the order of the events in the segment
• Students fill in the blanks of the exercise with either the simple past or the past perfect form of the verbs in parentheses.

Congratulations!
I used this movie segment to teach one of my groups and it did work! They really understood in practical terms the difference between simple past and past perfect!
Thanks a lot for posting it!
Fantastic job!!!
J.G.Reder (English teacher)

Great, Jackson. I'm glad you and your students enjoyed it. Thanks for the feedback. See you!

It is a cool! Good way to introduce to the students how to write past perfect and past tense.

Keep up with new ideas!

Thanks, Jimmy. I'm glad you like it. See you.

help! how can i get the movie segments you used? please reply asap. hehehe this site is fantastic!

help! how can i download the movie segments that you used?

Check out hte post in this link, please. I hope you manage it.

Hi Claudio, by accident I discovered this Movie Segment& extremely glad with the discovery. Do I need to subscribe or be a member to continue using it? Let me know the protocol. And BTW, do you have any games too to incorporate into the teaching? I sincerely love these movies and would like to use games in between to break the monotony. Thanks so much for your sharing. Chris from Penang, Malaysia

Hi Claudio
Found the MOVIE SEGMENT by accident and glad of the discovery. It enhances my teaching tremendously. Question - do I need to subscribe or be a member to continue utilize this MOVIE SEGMENT? Let me know the protocol. Also, would love to incorporate games into the teaching too to break the monotony besides the movie, your thoughts please?
Christine

I'm glad you enjoy the site. You don't have to be a member to use the material available here. Everything here is free. My main goal is sharing, not profiting. You may use everything you need here. About games, of course they're welcome. My objective, though, is to actually check the students' production after several classes dealing with grammar input, practice and production. But you can always use games, of course. The more fun you can make a grammar class, the better it is. There are many sites you can google for grammar games. Here is one of them: http://www.english-online.org.uk/games/gamezone2.htm See you.

OIC... Tks so much for yr generosity. It's hard to find someone who wld share willingly. I hv just used yr movie-segment "Casino Royale" to teach PAST PERFECT Tense, my students enjoy it very much and it has enhanced their understanding of this Tense greatly. Tks again for sharing!

I'm really glad it has helped you. Come back often.

I'm not sure what could have happened. If you have realplayer installed, check on TOOLS, PREFERENCE,then DOWNLOADING AND RECORDING, next check the option ENABLE WEB DOWNLOAD AND RECORDING and click OK. This should be the problem. I hope it works. See you. Don't hesitate contacting me.

Can you give me some help to download the video? I can't find the link, I tried at youtube but din't found it there either :-(

Thank you very much
Cleo

Cleo,
Please read the other commnts on this post and this link as well. It is really easy with ralplayr. Let m know if you managed.

Just A M A Z I N G! I've taught the same level twice and I've been looking for something practical to teach the past perfect/s.past together.. Finally found it! Thank you!!

Thanks, Cecilia. I'm glad you like it. See you.

Thank you for sharing such great material!
I used it in my classroom and the students just loved it!
They enjoyed the videos and got a clear picture of the target language. Thanks again!! Keep up the good work!!