Juno: 2nd Conditional (with Would and Should)

This is a great movie. Teenage pregnancy is dealt with in a creative, different manner. My students had a lot to say about it. I used it to practice the second conditional in a contextualized manner. 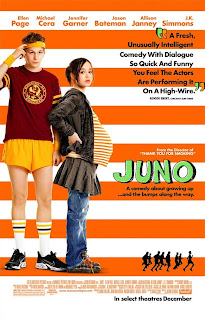 I. Watch the movie segment and answer the following questions in groups:

1. Describe what happened in the segment.

2. What was her mother's reaction?

3. What was her father's reaction?

4. What was her friend's reaction?

5. What did Juno say she was going to do? Do you like her idea? What do you think will happen next?

If you were Juno's best friend?

If you were the foster parents to whom Juno promised to give the baby away.

II. Now imagine the same situation Juno is facing, but consider the father's situation below. What should the father of the baby do if:


- he were under aged too

MOVIE SEGMENT DOWNLOAD - JUNO
Posted by Claudio Azevedo at 12:04 AM

I congratulate you for your blog. I love the cinema and I love teaching English so... I wish this blog were mine... Since it isn´t, thnak you for sharing all these wonderful resources.

Thanks. Great to hear that.

Congratulations, sir, for the incredible videos and activities you have available for both teachers and students on your blog. I myself have had a chance once to attend your workshop in one of ACBEU's seminars in Salvador/BA a couple of years ago and I found it so interesting. I've had some hard time trying to download the videos with Real Player, but, after reading some posts here, I finally managed to get them. Thank you again and keep up with the good work!

Hey Felipe. I remember that seminar in ACBEU well. I miss Salvador. Great to hear from you.

this is a wonderful place congratulations .
I wonder if you could help me to create one, but using songs. would you like to?

Thanks for your kind words, but I don't think I would be able to work on a blog about songs. I'm not an expert in the area. But go for it. Songs are wonderful for language teaching.

I am amazed!, this is such a wonderful site... and I know it takes so much time to do this kind of things.. THANKS SO MUCH FOR SHARING.. from Barcelona ,Spain

Thank you Claudio. You saved my life this course. Congratulations!

Great to hear that. Thanks.

Thanks a lot for sharing your ideas! They are amazing.
Best wishes... from Mexico City!

Thanks for your words.

Just wanted to thank you, Claudio. I love this site, and frequent it often. I have made my own lessons with movie clips as well and hope to upload them or share them with this site someday. This clip is great for contractions as well which my student has issues hearing sometimes. So I get to utilize it a couple of ways. Thanks again, from Barcelona!

Thanks for your words, Patrick. Please, do share your activities. The more the better.