This segment is great to help practice Participial Phrases, a very unattractive grammar point that can be fun with a movie segment. 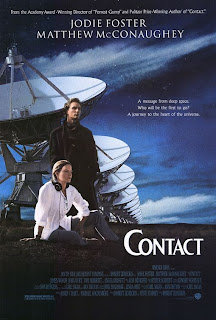 I. Watch the movie segment. Then answer the questions in pairs.

1. Do you think that if humans actually received a message from another star, like Vega, such a commotion would happen? Would it be similar to the one in the segment?

2. What sorts of demonstrations did you manage to see?

3. What were these groups protesting against or claiming for?

4. Which of the groups would you join? Why?

5. Do you think humans will ever or have already made contact with people from other stars? Explain it.

1. The reporter presenting the news announced that there have been several deaths in San Diego.
2. All TV shows being broadcast were talking about the message received from Vega.

3. The reporter announced that believers and non believers camping near the VLA facility in New Mexico have come to protest or pray, expressing their points of view.

4. There was a group of people holding antennas and wearing metallic clothes in order to make contact with Vega.

5. Intruigued by the manifestations, scientists riding a car saw various kinds of demonstrations.

6. The man waiting in a cannon was waving an American flag.

7. Neo Nazis holding banners supporting Hitler's ideas were being contained by the police.

8. A man playing the guitar pretended to be Elvis.

9. Singing Hail to Vega, the choir caught the scientists' attention.

10. Intimidated by the long haired blond preacher, the scientist shut the car window.

Unfortunately, there isn't an answer key here because of the format of the answers, but they are on the worksheet.
Posted by Claudio Azevedo at 12:03 AM

Hello, Cláudio. I'm here just to tell you that your blog is really amazing. Never stop posting on that. I've been using it a lot and my students love it. We're your fans. Keep updating it with your wonderful video activities.

Hi Andrea,
Thanks for your words. Don't worry, I won't stop posting them since I already have about other 100 activities ready for the blog. Enough for the next couple of years, once a week. See you.