I love animated films, I have said this dozens of times. This one is not different. I love the characters and the story. Because there are 5 monsters being described in this scene, I used it to practice superlative form of adjectives. 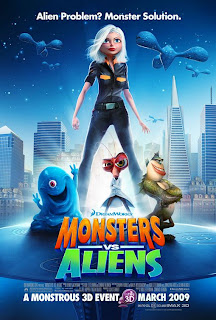 A. Make a list of 6 different adjectives you consider to be interesting for a monster
Ex: Strong, ugly, etc

B. Listen to all of the students' list of adjectives and write them all on the board. In pairs, select 8 adjectives you consider to be the most interesting ones for a monster.


C. Watch the movie segment and match the characters and their characteristics:


( ) Due to her exposure with the meteorite's radiation, she is very strong and tall and has a resistance to energy attacks.

( ) He was an insect transformed by nuclear radiation into a monster with the ability to shoot silk out of his nose.

( ) A brilliant scientist who, in an experiment to have the abilities of a cockroach, became a giant cockroach's head and some personality characteristics of the cockroach, but gained the ability to climb up walls and great resistance to physical damage.

( ) An indestructible gelatinous mass created from a tomato. His greatest strength is his ability to eat any substance and to be indestructible.

D. Now write sentences comparing all the monsters, using the adjectives you have selected in exercise B.

Ginormica is the strongest monster.

MOVIE SEGMENT DOWNLOAD - MONSTERS VS ALIENS
Posted by Claudio Azevedo at 12:02 AM