Battle for Terra: Compound Nouns with Some, Any, No, Every

As you know, I could spend days watching animated movies. This is a 3D movie with a great message for kids. I think adults understand the movie better than children, though. I used this segment to practice compound nouns with some, any, no, every in a contextualized way. Hope you like it. 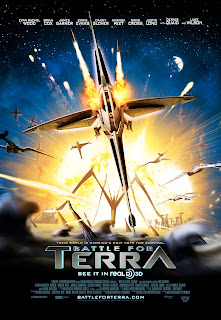 A. Watch the movie segment and describe what you saw to a partner.


B. Now do the following exercise. Circle the correct alternative.

1. Humans exhausted every natural resource. There was anything / nothing / something left .


2. Colonies were established on the neighboring planets, Venus and Mars. Two centuries later, war was declared and something / anything / everything was destroyed.


3. There was something / nothing / anything the survivors could do. Travel to another galaxy and find another planet everywhere / somewhere / nowhere in another system.


4. The human asked Mala to do anything/ something / nothing for him. To repair his spaceship.


5. They eventually shook hands, a demonstration that anybody / somebody / everybody can be friends even if they don't have something / anything / nothing in common.


6. Mala is a Terrean. She is not human but there is something / nothing / anything about her that resembles a human being. She has two eyes and one mouth, for example.


7. According to the segment, there is life nowhere / somewhere / anywhere in other galaxies.


8. What's your opinion? Is there life somewhere / nowhere / anywhere in outer space?

1 Nothing
2 Everything
3 Something / somewhere
4 Something
5 Everybody / anything
6 Something
7 Somewhere
8. Anywhere
Posted by Claudio Azevedo at 12:03 AM

Tags: Compound Nouns with Some Any No Every

There's no subtitles in the segment. :/

No, there are not. They are not necessary for the task, though.

Hey there! I love your website.. Gotta a question, is there a way for me to download this segment? I'm terrible with technology... Tks!!

Thanks a lot for sharing your work...