While You Were Sleeping: Reported Speech

This a very funny scene. Your students will enjoy it a lot. Tell me if you like it or give suggestions by leaving a comment, please. 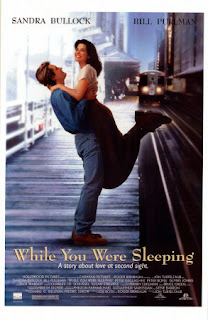 Talk to a partner about the following situations. Decide what you would do:

1) What would you do if you saw someone falling on the subway tracks? Justify it.

2) If you saved someone's life, would you expect a financial reward? Why/Why not?

3) Would you hide a secret in order not to hurt a stranger's feelings? Why/Why not?


Now watch the movie segment and decide who said each of the following lines:

8) He was pushed from the platform at the train station. ___

EX: 1) Lucy asked if he would marry her.


• Decide which verb tenses you want to assess


• Select a few lines from the segment with the target structures


• Students check which characters said them in the segment

Posted by Claudio Azevedo at 7:50 PM

lovely activity; I´ll try it on this week. :) Thanks.

Thanks. Tell me if it worked after you have used it. If you have suggestions, let me know. See you.

It helped me a lot this week. My students just loved it...

How wonderful. I'm really glad they liked it. See you around.

Thanks. It really helped me in class.!

I love this movie,so I loved working with it in class.Thanks very much.

I love this movie,so I loved working with it in class.Thanks very much.

I showed this segment last week. In fact, this is one of my favorite activities in the blog. My students loved it and practiced the grammar point meaningfully. Thanks!

very interesting, I'll use it very soon as I'm currently working on movies with my students. Thanks a lot!

Dear Claudio,
Thank you for sharing this great activity. It worked super with my students. I did it after we worked on a reading activity where there is some dialogue, so I wanted to focus on Reported Speech, your activity helped integrating the four skills.
I would like to know if it is possible to get the video clip without the subtitles as I think it would be an useful follow up to encourage learners to understand without them.
Thanks once again
Debbie

Thanks. I'm really glad it worked out. Sorry, I don't have the segment without the subtitles. It is not the objective of this blog. See you.

How can I download this movie segment you are showing in your blog? I really wish I could try this activity at class.

Love to try this activity at class. But can you help me...how can I download this video segment or where can I get it? Thanks

Love this activity. Your blog is great!

I'll try it with my class tomorow, sure they will love it too

I'll try it tomorrow with my class, sure they will love reported speech this way. Good idea, thank you

The answer key has been added to the end of the post.

Thank you very much for sharing all these lessons. Great work!!!

Hi! What a great activity, thank you! However, I'm not sure whether I haven't managed to see the whole clip, or whether I'm right in thinking that sentences 5 -10 are not heard in this segment. Could you let me know please?

Also, I wanted to point out that there's a slip in the answer key (nº6) "need" should be "needed".

Thanks once again - I'll certainly be returning to your blog!

Thanks for lettingme know about the typo. It has been corrected. About the segment, I just checked it again and I did hear the sentences you mentioned. I don't know what might have happened.
Thanks for warning me, though.

Thanks. Tell me if it worked after you have used it. If you have suggestions, let me know.

I liked it a lot. I´ll be working on it this week. Thanks a lot Claudio!!

Thank YOU for the feedback. Enjoy it.

Thanks! It was great! My students loved it and it was very easy to teach the reported speech. It was a good class, students did not get bored and all of them participated. Thanks a lot!

Thanks, it is wonderful to hear that.

I couldn't download the video! :(
It said invalid parameters! :((

Wonderful blog and very impressive worksheet. I'm going to use it soon and I'm sure to come back for more. I love the way real-life movie segments are treated like grammar strips, this indeed requires an analytical brain. I don't think ordinary people could be able to do it.

Thanks for your kind words!

This activity is great. Thank you!

My students and I have really enjoyed it. Thank you.

Wonderful!!!!I´ll use it with my students