This thriller is based on a Stephen King's short story. As you can tell, it is scary, but it is not a violent movie. This is an exciting scene that I used for practicing reflexive pronouns with my students, because the snippet shows objects moving by themselves inside a hotel room, which number is 1408. This activity makes the grammar point more meaninful, I guess. 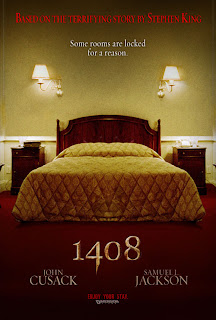 I. Work in pairs:


1. Do you believe in supernatural activities? Explain it.


2. Have you ever seen or known someone who has experienced supernatural activities?

3. Would you stay in a hotel which is famous for having ghosts? What about a history of murders? Why (not)?


II. Watch the segment and complete the blanks with a reflexive pronoun:

Posted by Claudio Azevedo at 12:02 PM

Thanks, but the video is not on youtube, just here. Have you tried the link in the end of the post? THere shouldn't be a problem there. All the videos are in my wiki, not on youtube.

Hi! I really like your blog in general. It is very nice! I use it with my students very often. Congrats! I think your movie segments are a great choice to practice that particular grammar point. One question, how do you 'cut' those segments of the movies? I have some movies I would like to 'cut' but I do not know how. It would be great if you could enlighten me! Thanks!

By the way, as anonymous said, there is a problem with the video file. I've been downloading some videos of your blog, but this one does not seem to work. After downloading, what you get is not a .wmv but a .doc with strange symbols on it, like a computer language or so. Could you check whether the file you uploaded is corrupted or sth? Thanks!

I use movie maker. It is simple and easy.

Thanks for the warning. It is fixed now. See you.

i love this activity.. thanks for sharing.. i will definitely use this in my lesson.. Great activity!

Thanks, Roy. I hope your students enjoy it.