The Longest Yard: The Subjunctive 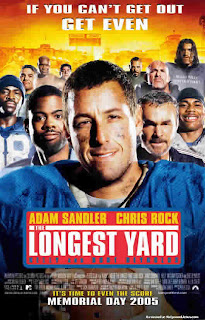 A. The subjunctive form of a verb is used following verbs or adjectives of urgenc

obligation or advisability. Write the words below under the correct column.


B. Now watch the movie segment and choose the correct alternative for the items below. Make sure you decide whether you will use affirmative or negative form according to the information presented in the movie segment.

1. Paul Crewe thinks that the police are / aren't / be / not be party poopers.

2. It's essential that a drunk driver respects / doesn't respect / respect / not respect a police officer.

3. The officer demanded that Paul left / didn't leave / leave / not leave the vehicle.

4. It's critical that Paul drinks / doesn't drink / drink / not drink while or before driving.

5. According to the reporter, it's imperative that a football player is / isn't / be / not be accused of shaving points*.

* Shaving points in football is to articificially control the score of the game (using the players) so the game score comes in within a certain range. Usually done to manipulate the Las Vegas betting odds.

6. Paul's girlfriend insisted that he got / didn't get / get / not get one more scratch on her car.

8. It is crucial that Paul gets / doesn't get / get / not get arrested because of the absurd mess he caused to the city.


- What should happen to Paul Crewe? Should he go to jail, have an alternative sentence like helping the community or assist in institutions, or something else? For how long? Explain it.

Hi, Cláudio!
Congrats for the blog! I'm having problems in downloading the worksheets, because scribd is asking for us to pay in order to download them. Are you going to post the worksheets in another place for us to download? Thanks!

I don't know why they are charging you for a document that is not theirs. There must be a mistake. Don't you just have to log in by creating aan account - free? Well you can always print it too. I really don't intend going to another site for all my documents are already at scribd. Sorry about that.

Thank you so much, Cláudio!
I found a way to download the worksheets for free =]

I joined a website where teachers post their worksheets for free download. And for my surprise, I saw one of YOUR worksheets in there. The one about Coraline. She didn't change and posted as hers.

The site doesn't allow this kind os stuff and the ask us to report it.

Hi Sandrinha. How unethical!!! All I ask is acknowledgement, that's all. Maybe you can help me with this issue. I browsed through the site and could not find the worksheet or an email to write a complaint or report a file. If you could tell me how to find it, I'd be really thankful. See you.

I reported to the website. I'm waiting for an answer!

Thanks, Sandrinha. Let's see if they will do something about it. You're great!

Hey ..Very very congratulation for your blog. I liked the content of your blog. It seems to be you are very experienced person..

What a great idea! To base these exercizes on a movie makes learning fun!

Hello :)
I can't find a link to download the movie segment for this activity or the "Alice in wonderland" activity.
Can you help me please?

Dear Lita,
Both links for downloads have been added at the end of each of the posts. See you.