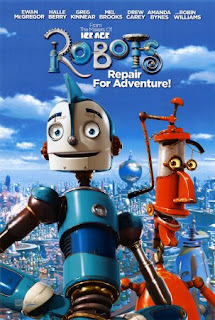 This segment is great for children. Play it from the beginning up to 3'22. Ask

ents to watch the segment with attention and decide what the robots are doing during the scene. Tell the students that the list below contains the activities that robots perform everyday. Ask them to check the ones they can see the robots doing during that specific morning.

( ) They work inside the stores.

( ) They listen to classical music.

( ) They take care of the traffic.

( ) They smoke cigarette on the street bench.

( ) They eat in restaurants.

( ) Humans play with the robots


Now ask your students to rewrite the sentences above using the present continuous, affirmative or negative statements, according to the information presented. Students have to say what they are (not) doing during that morning.

Ex:
1 - Some robots are playing in the streets.
2 - An ice cream vendor is selling ice cream.

Kinesthetic Game:
Take pictures of your students performing the actions the robots are doing in the segment (or any other action they want). They can’t see each other while you are taking their pictures. Prepare a slideshow with the pictures (you may use an I-Pad to do it). Finally, show the slides and the students have to write sentences saying what their peers are doing:
Ex:
Mariana is driving a car.
Jonas is selling ice cream.

The students who identify most actions and write most correct sentences are the winner.

Posted by Claudio Azevedo at 10:34 AM

Hey I'm a teacher in a private institution where there is some kind of filter on each computer. I was wondering if this videos are in youtube. If they were, could you please write the link. I would really apreciate that.

Sorry, they're not in youtube or anywhere else, but here. What you can do is download the video straight from this blog at home, the worksheets too, and show it in your classroom. Let me kkow if it is possible, please. See you.

Dear Mr. Azevedo,
My name is Josuel Queiroz.I am an English teacher and I have been teaching at Public School for about eleven years.Iwas told about your blog by a teacher from Acbeu where Iam taking a TTC supported by the US Embassy.I want to use movies in my class but I don´t know how to download it.Can you tell me how?Thank you so very much.

Please check out this link, which is in the blog's sidebar. Here you have instructions on how to download the segments. using realplayer and other reader's suggestions as well

Let me know if you have managed. See you around.

I am not in Brasilia now. As soon as I get home, I will work on it. I can on only do it next Tuesday. See you.

The youtube link has been removed. Youtube did it, not me. However, there are two other links for downloads there. With firefox mozilla browser, use DOWNLOADHELPER and you will easily manage it. You can download it for free from the web.

The link to download the Robots segment is at the end of the post. The videos are there. I don't know why you can't see the videos. I can. It is probably your browser or you flash player version that needs update. However, I don't know how to visualize the videos on I-Pads, for example. Anyway, you can download the video from the link.

Dear Claudio. I've just discovered your blogspot thanks to a colleague at school. We plan on using the Robots clip and worksheet as part of our Open Day activities. I can hardly wait to have a few minutes to take a look at the other things on the blog. It is wonderful! Thank you so much.
Nora (mother-tongue English teacher living in Italy)

Thanks, Nora. There is a lot to see here. Have fun!