This is an activity to practice comparatives. This animated movie is fantastic. I love animation and this one is really speacial. The scene is great to compare the main characters, great rivals. 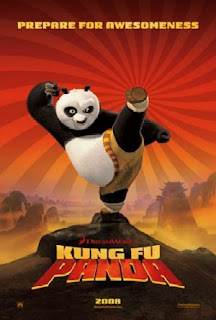 Take a look at Po and Tai Lung. Then write next to the characters the qualities that best describe them, according to your impressions from the pictures. Make sure you write different adjectives for each of the characters.

This is Tai Lung 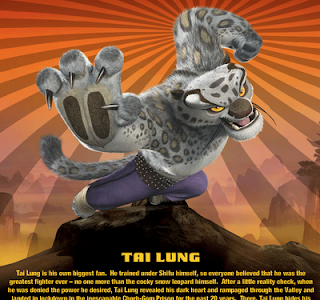 
After watching the segment:

Take a look at your list again and decide if you would like to change your original guesses by writing sentences comparing Po and Tai Lung.

Ex:
(Po / Funny) Po is funnier than Tai Lung.
(Tai Lung / Strong) Tai Lung is as strong as Po.
(Po) / Fat) Po is fatter than Tai Lung.
(Tai Lung / intelligent) Tai Lung is less intelligent than Po.
How to develop your own activity
- Select a scene in which you can compare two characters
- Choose adjectives that describe the characters
- Prepare a chart for students to fill in with adjectives that describe them
- Select the adjectives you want to assess
- The students write sentences using comparatives


I.  Project a picture of Po and Tai Lung on the board. Give each student a white and an orange balloon. Tell them that the white balloon represents Po and the orange balloon represents Tai Lung. Each student gets slips of paper with the vocabulary in the box. Make sure they understand the adjectives. Tell them to stick the words on the balloons according to what they think of the characters.
I.              Count how many of each adjective they have on the balloons for each character and elicit comparative sentences. Write the sentences on the board as the students say them.

III.            Miming Game: Ask students to stand up and make a line with their backs to the board.  One student should face the board and mime the sentence projected on the board (Slides with comparative sentences about Po and Tai Lung). The first student in the line has to say the sentence. If he says it correctly, he mimes the following sentence and the student who was miming goes to the end of the line.


IV.          Follow up: Students pair up to make a poster using their balloons and a slip with an adjective the Teacher gives them. Tell them to draw the faces of Po and Tai Lung on the balloons. They should glue the balloons and the word on a sheet of paper and write a comparative sentence.
Posted by Claudio Azevedo at 1:19 AM

Hi I really like your website 'cause I use it in class. But I would like to tell you that the video link on your website doesn't work, you click on it and it says it's no longer available.
Could you do something about it.
THX
sara

Try it again tomorrow. I'll replace the segment on youtube. Thanks.

Claudio! Thank you so much for sharing your worksheet and your wonderful lesson plan! I would like to be able to make worksheets as skillfully as you, but struggle with that. Any tips? Is there a special program you use? I think I have Microsoft Word on my Mac and feel very limited. Thanks again!

Thanks for your compliments. To tell you the truth, I don not use any kind of program or software to do it. I use Word, that's all. I'm not techy savvy, so I think that I just use the basics. If you send me a message with your worksheets telling me what you'd like to do with them, I may be able to help you out with tips, OK? claudioazevedo@thomas.org.br