Dark Skies: Past Modals for Speculation 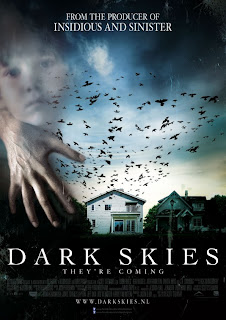 Dark Skies is a great thriller, but the ending is a bit disappointing. The movie gave me chills, which I love while watching thrillers. I recommend it. This is an intriguing scene, perfect for modals for speculation.

I. Watch the segment, discuss the questions below, and then check the items that you believe are possible explanations for the  phenomenon in the segment.

2. What was so peculiar about it?

3. Have you ever heard of anything similar to it? Talk about it.

4. How would you react if you lived in that house?

( ) The birds were contaminated.

( ) It was the start of an outbreak - a sudden beginning of a disease or something else dangerous or unpleasant.

( ) It happened because of environmental causes, such as hail storms or lightning.

( ) It was caused by fireworks.

II. Rewrite the sentences above, using past modals for speculation.


III. What MUST have happened, in your opinion? What is the most plausible explanation?Justify your answer.

IV. Rewrite the sentences in II, using past modals for speculation.

Answers will vary, but all of the items in I are possible explanations, according the movie characters.