Home on the Range: There + to Be

Animated movies are just great. This one is not an exception. I used this scene with beginners, practicing the use of THERE TO BE with farm animals and food items. I hope you like it.

I. Watch the segment. Read the items below and check the ones you managed to see during the scene.

III. Now write sentences about the items in exercise A, using There is (isn't) or There are (aren't). Remember that you may use Any and Some in your sentences


Ex: There is a black cow.
There are some chickens

You won't see bananas, a dog, and grapes

I.
Project on the board the following chart and ask students to say what they have seen in the segment (T: Is there a black cow?...)

II.             Slides with the animals in IV. Tell students to make a line to participate in a game. The T projects the pictures and vocabulary from the chart in IV. The first student in line chooses the ball that corresponds to the scene they’ve watched (red – there is, green – there isn’t, blue – there are, yellow – there aren’t) and tries to throw it into a basket. When he/she hits the basket, he/she has to say a complete sentence (e.g. There is a chicken.).
III.            Ask students to write sentences about the items in IV, using There is (isn’t) or There are
(aren’t).

Posted by Claudio Azevedo at 12:30 AM No comments:

Tags: there to be

This has been one of the animated movies that I have laughed most. Its humor is clever and extremely attractive to both adults and children. I strongly recommend it. I used this scene to practice the passive voice use with present perfect statements, because the astronaut day's hasn't ended yet, so we can contextualize the grammar point easily. 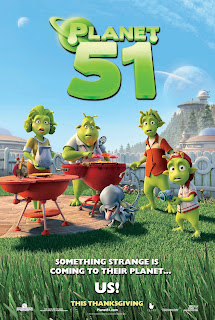 A. Watch the movie segment and check what has happened to the astronaut since he landed on Planet 51. Fill in the blanks with the present perfect tense of the given verbs. Decide if you will use affirmative or negative forms according to the segment.


B. Now rewrite the sentences above using passive voice.

Answer key:
A. 1. has placed / 2. has asked / 3. has attacked / 4. has chased / 5. has run over / 6. hasn't found / 7. hasn't taken off
B.
2. He has been asked for an autograph (by a boy).
3. He has been attacked by a strange pet.
4. He has been chased (by the pet).
5. He has been run over by a boy on a bike.
6. Other humans haven't been found.
7. His suit hasn't been taken off. A peer of mine said that he had used a slides presentation with links to my passive voice activities. I was sent the link and came across this really cool and thorough class on passive voice. I'm glad Simon Friend used my blog for his video activities. His slides are effective, fun and constructive. Thanks Simon Friend for these really cool slides. Thanks for linking my site to it.