I Am Legend: Future Perfect

This segment is excellent for the students to practice the future perfect tense. The segment is thought-provoking and chilling. The students have to use their imagination to predict the future. 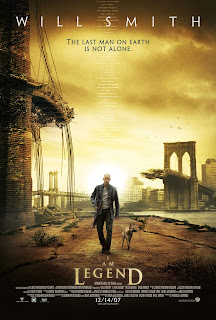 Discuss the following questions with a partner:


1 - Are you optimistic or pessimistic about the future? Justify your answer.

2 - Do you think mankind will ever discover a cure for cancer?

3 - Will human beings be free from diseases in the future? Why (not)?

4 - What would a city like New York look like if all of its inhabitants had to evacuate it in a hurry?

Now imagine that NY City had to be completely evacuated because of a very destructive virus. Check what you believe would happen to NY if such situation did happen.

( ) The streets would become extremely filthy.

( ) People would abandon their cars everywhere.

( ) Wild animals would escape from the zoo to look for food around the city.

( ) Animals would take control of the city.

( ) Some people would hide in the buildings to steal stores and banks.

( ) Life in NY would become a complete chaos.

( ) People wouldn't drive their cars because of the lack of gas.

( ) Buildings would be destroyed by the angry population.


Now watch the movie segment and pretend you are the main character in the movie, the one played by Will Smith. Imagine that you could have warned Dr. Alice Krippin about the consequences of her unfortunate discovery. Tell her what will have happened to NY within three years from now (by the year 2012) if she tests her discovery on human beings.

By the year 2011, NY streets will have become completely filthy.

People will have abandoned their cars everywhere.

Wild animals will have escaped from the zoo to look for food around the city.


How to develop your own video activity

- Select a scene that takes place in the future, preferably with a pessimistic view of the future.

- Ask the students to observe the changes that will have taken place on Earth.

- The students write sentences with will + have + past participle.


WORKSHEET
Posted by Claudio Azevedo at 1:00 AM

Thank you very much for posting this one, Claudio. I'll use it tomorrow.
Look, I'm promoting your blog, I've just twittered about it (and it also goes to my facebook status) and will recommend it in the Webheads e-list.
Everything looks great!
Ronaldo

Claudio,
I´ve attended 2 of your sessions at Braz-tesol and was very glad to learn about your blog via Ronaldo´s tweet. The other day I was watching "Benjamin Button" and remembered you. There´s a scene which is perfect for the Third Conditional practice. He uses lots of "If she hadn´t ..... this wouldn´t have happened." Have you already seen the film?
Congratulations on your blog.

Hi Claudio,
Thanks for sharing this. I have got it from twitter. Congratulations on you blog. It looks great. The movie activities are just wonderful.

Hi, José Antonio,
It's great to see you around. Thanks for your words.

Dear Ana Maria,
It's impossible to see films without those "grammar eyes". The Benjamn Button scene you have mentioned has already been posted here. Check it out. There is another scene in the same movie for "I wish...", but it is a bit too short, unfortunately. See you around.

Thanks, Ronaldo. In fact, your promotion has been working. I'll try to learn a bit more about twitter. Thanks for the push!

Thank you for the movie trailers. I find them very useful in the classroom and/or given as assignments to students.
Keep up the good work,

Dear Yassine,
Thank you for the message. I'm glad the activities are useful. Keep posted!
Claudio

Thank you Caludio for your great work! Keep inspiring us!

Hi there, What a blog Claudio! This is very very helpful for teachers. Basically, when we need to find a meaningful source that encourages students to learn. Me and many other will thank you forever. Congratulations!

Congratulations Claudio for this blog! What a nice source! Keep on it!

Thank you. I am glad it is useful. See you.

Thank you. Really Helpful!
Keep up the good work.

Hello Claudio,
I just wanted to congratulate you on your blog. I think it is absolutely first class! I have many years of teaching experience and have been promoting the use of film in class since the early 90's. It's super to find someone else who also believes in the value of using visual imagery in teaching and also to come at something from another's perspective. Once again, thank you again for all your splendid work and all the very best of luck to you for the future.
Kind regards,
Retta

Thank you for your motivating words, Retta. They are a boost to keep me moving. Regards!

Excellent idea! Thank you so much.

Thank you! This is great. I love it.
-ESL teacher in France