Now You See Me: To x For 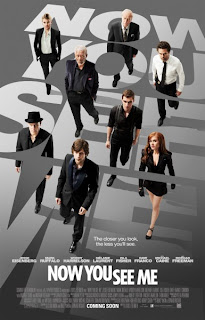 One of my 2013 favorite movies. The lovely story and special effects were so gripping that I was totally involved by the plot and its twists. I strongly recommend it.


Look at some of the ways we can use FOR or TO:

To for destination – We’re going to Paris.
To – What time is it? – minutes before the hour – It’s a quarter to three.
To – Distance – It’s about 1 km from my house to my English School
To – Comparing – I prefer reading to watching TV.
To – Giving – I gave a book to my cousin.
To Motive or Reason (with verb) – I came here to study English with you.

For:
For – Benefits – Yogurt is good for your health.
For – Periods of time – I have lived in Brasilia for 12 years.
For – Scheduling – I made an appointment for Friday.
For – Agree with or in favor of something – Are you for or against the development of nuclear weapons?
For – Doing something to help someone – Could you carry these bags for me?
For – Motive or Reason (with noun) – Let’s go out for a drink?

I. Watch the movie segment and fill in the blank with FOR or TO. You have to explain why you chose it.


1.Many people in Chicago came _________ see the magic tricks on a beautiful Monday evening.

2. In New Orleans, the hypnotist knew the man hadn't gone on a business trip, but on a trip with his sister-in-law, his lover. The magician made her forget everything. He did it ______ her husband, because he wanted his money.

6. In Los Angeles, the magician had to be handcuffed under water ___________ sixty seconds before the piranas were thrown into the tank.

Tags: prepositions, to x for

I really love your blog, it is utterly brilliant! I wish I had come here earlier. I've already used 2 extracts during the lesson and I'm very satisfied.
Greetings from Poland :)

I can see some vídeos anymore. What can I do??? For example, I cant find : the robots" film...(presente continuous)...HELP please.....

Hey, Claudio! I am a huge fan of yours for years now and have already contributed a little to the site. I am very happy to say your activities are getting even better! Keep up the good work!

Hey, Claudio, I am a huge fan of yours for years now and have already contributed a little to the site. I am very proud to say your activities are getting even better! Congratulations and keep up the good work!

Sure I remember you, Rodrigo. Thanks for your words.

The link to download the Robots segment is at the end of the post. The videos are there. I don't know why you can't see the videos. I can. It is probably your browser or you flash player version that needs update. However, I don't know how to visualize the videos on I-Pads, for example. Anyway, you can download the video from the link. Let me know if you managed.

Hi Claudio, I've recently discovered your blog and I'm already addicted to it. I'm always looking for something new to use with my students and I had already used episodes from cartoon series in the class. But I had never used clips from films and I really like how creative you are with them. I'm trying to follow your example. Do you think the opening sequence of the film 'The Young and Prodigious T.S.Spivet' is good for an activity on USED TO? I would really like to see what you would make of it.

Thanks for your words. I confess I do not know this movie, but I will try to see it and give you feedback on your question. Keep posted, I will return to you.

I just saw the movie. Yes, the scene is very good to practice USED TO. If you develop something you like, you may share it on my blog. You receive all the credits, I can add a picture of yours and a link to one of your websites - if it is teh case. See you and thanks for the tip.

Your activities based on the movie The Young and Prodigious Spivet has high quality standard. I would love to publish them here. Since you have given me the OK, I would like to add a picture of yours and a link you may provide to your webpage or any other link you would like to share. It will be a pleasure to do so. Keep posted. They will be online really soon. Thanks, Cristina, for your great job.
PS - I do not have your email, OK?